The MSU Personality and Well-Being Lab is a part of the Social-Personality Program in the Department of Psychology at Michigan State University and is directed by Professor Richard E. Lucas. We investigate a number of questions about personality processes, the factors that are associated with high levels of subjective well-being, and the associations between the two. We also focus closely on measurement issues in the assessment of personality and well-being. Finally, we are interested in recent debates about research practices in psychology and beyond, and we have been actively engaged in discussions about replication and best practices in the field. Click below to find out more information about the members of the lab, the research we do, and opportunities for both graduate and undergraduate students.

Each year, several undergraduate students work in the Personality and Well-being Lab, gaining direct experience with the research process. Click below to find out more about how to apply.

Dr. Lucas will not be considering applicants to the Social-Personality Program for the 2021 academic year. If you would like information for future years, please click below to find out about the application process. 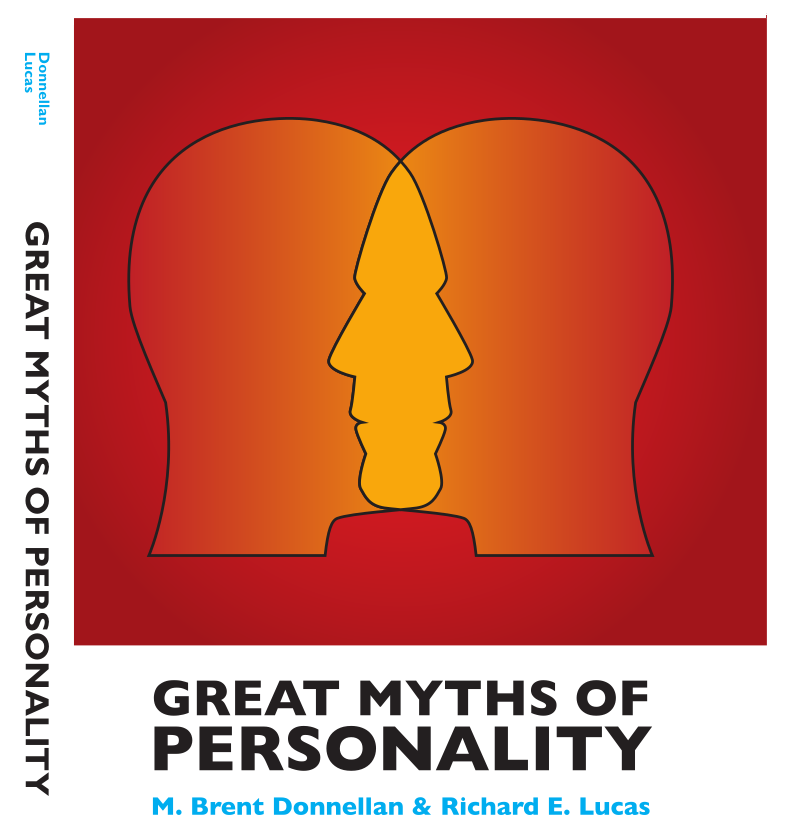 My book with Brent Donnellan on myths of personality is out now. This book describes and discusses evidence for a number of beliefs about personality, focusing on the extent to which these beliefs accurately reflect the evidence. In addressing these myths, we also cover basic principles in personality psychology, making Great Myths a useful resource for undergraduate personality classes. The book is available from Amazon. 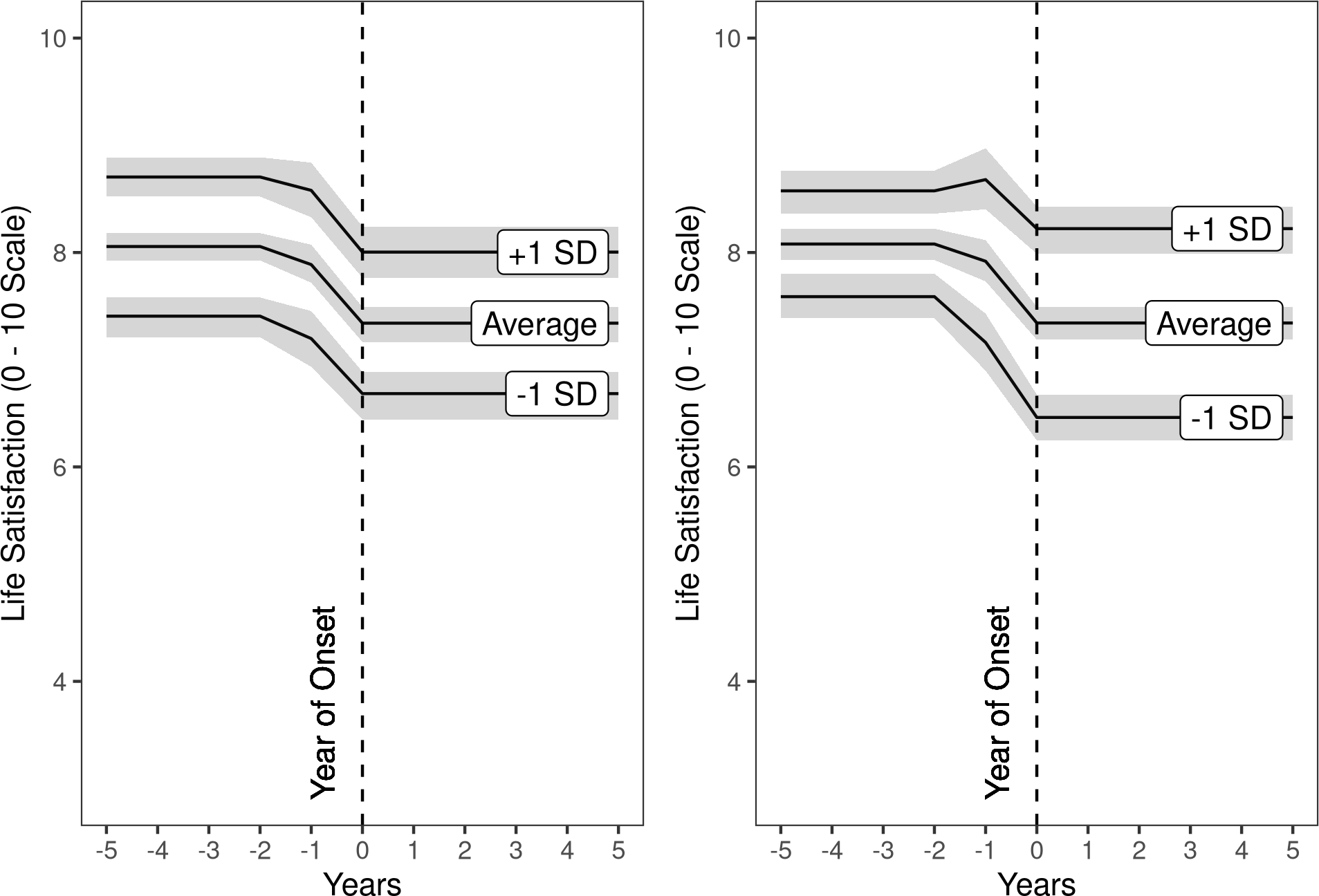 Social support has been proposed to be a protective factor that buffers the losses that result from the experience of negative life events. The present study uses data from a large-scale Australian panel study (the Household, Income and Labour Dynamics in Australia study) to examine how life satisfaction changes following the onset of a disabling condition and then to test whether pre-event or post-event social support moderates reactions to this event. Results show that the onset of a disabling condition is associated with a large decline in life satisfaction but these changes are not moderated by pre-event social support. Post-event social support does moderate change in response to the onset of a disability, but ambiguities in the interpretation of this association must be considered. This paper is forthcoming in Social Psychological and Personality Science and a preprint is available on PsyArXiv. 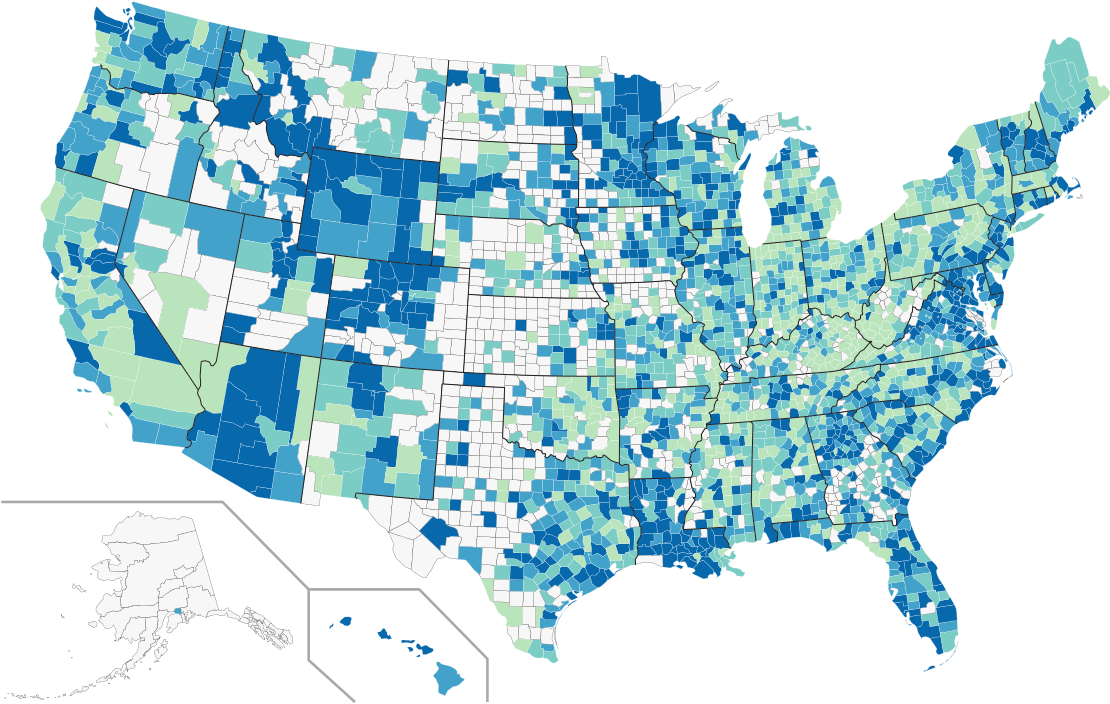 Recently, there has been increased interest in using well-being measures to guide public policy. However, there are legitimate questions about the extent to which regional differences in well-being reflect real differences in quality of life. In this paper, we tested whether regional differences in life satisfaction predicted an important objective indicator of whether a region is doing well: the population growth in that region from 2000 to 2010. Our results show that there is a fairly strong association between the two, which suggests that self-reports of life satisfaction do tap something meaningful about a region. Click here for the paper, or request the paper here for the Pubmed version. 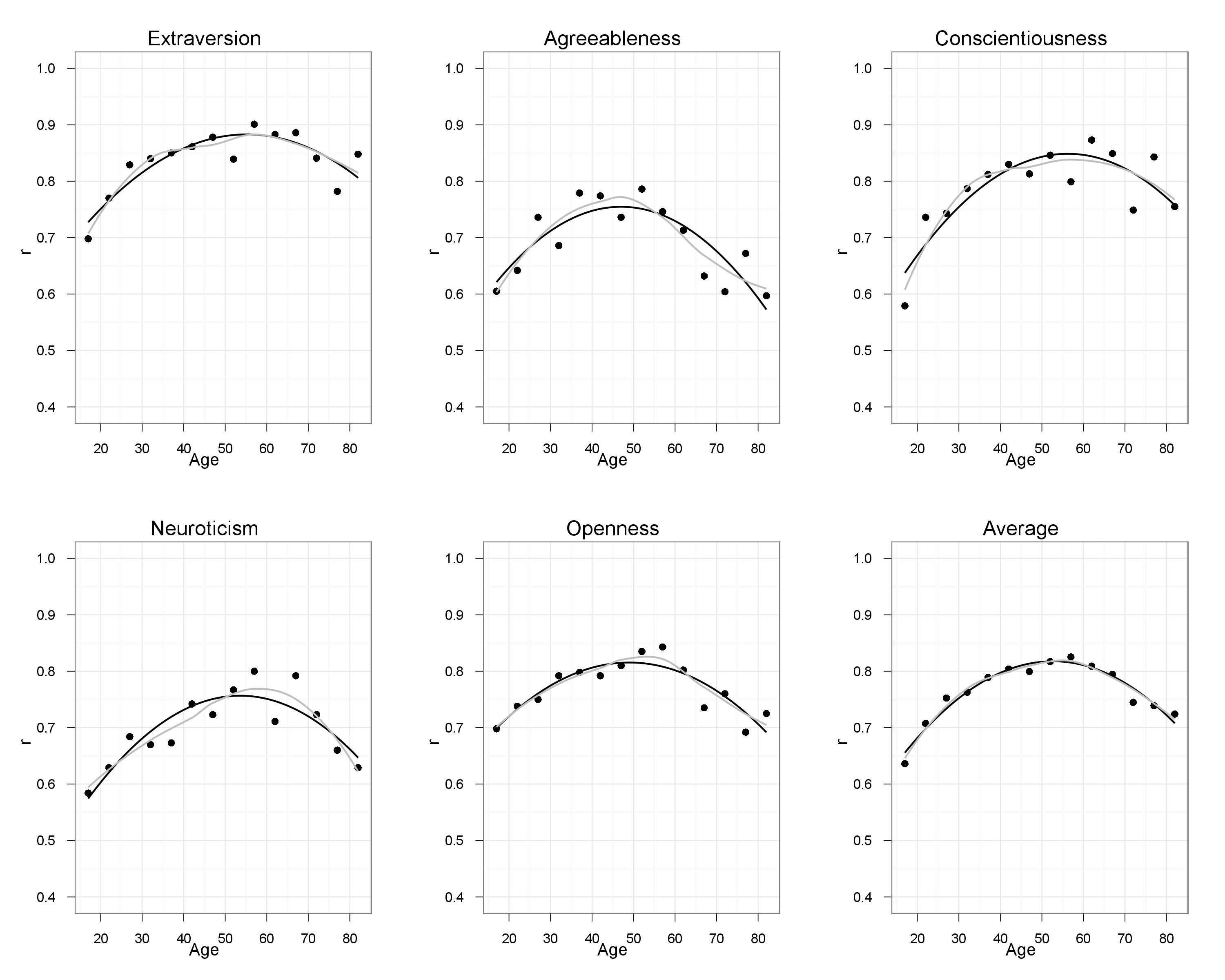 How stable is personality, and does stability change over the life course? We used nationally representative data from the German SocioEconomic Panel Study to examine this question. The figure above shows the four-year stability of the Big Five personality traits for people of different ages. These figures clearly show that stability increases with age until about age 60, after which it declines. Click here for the paper, or request the paper here if you can't get access. 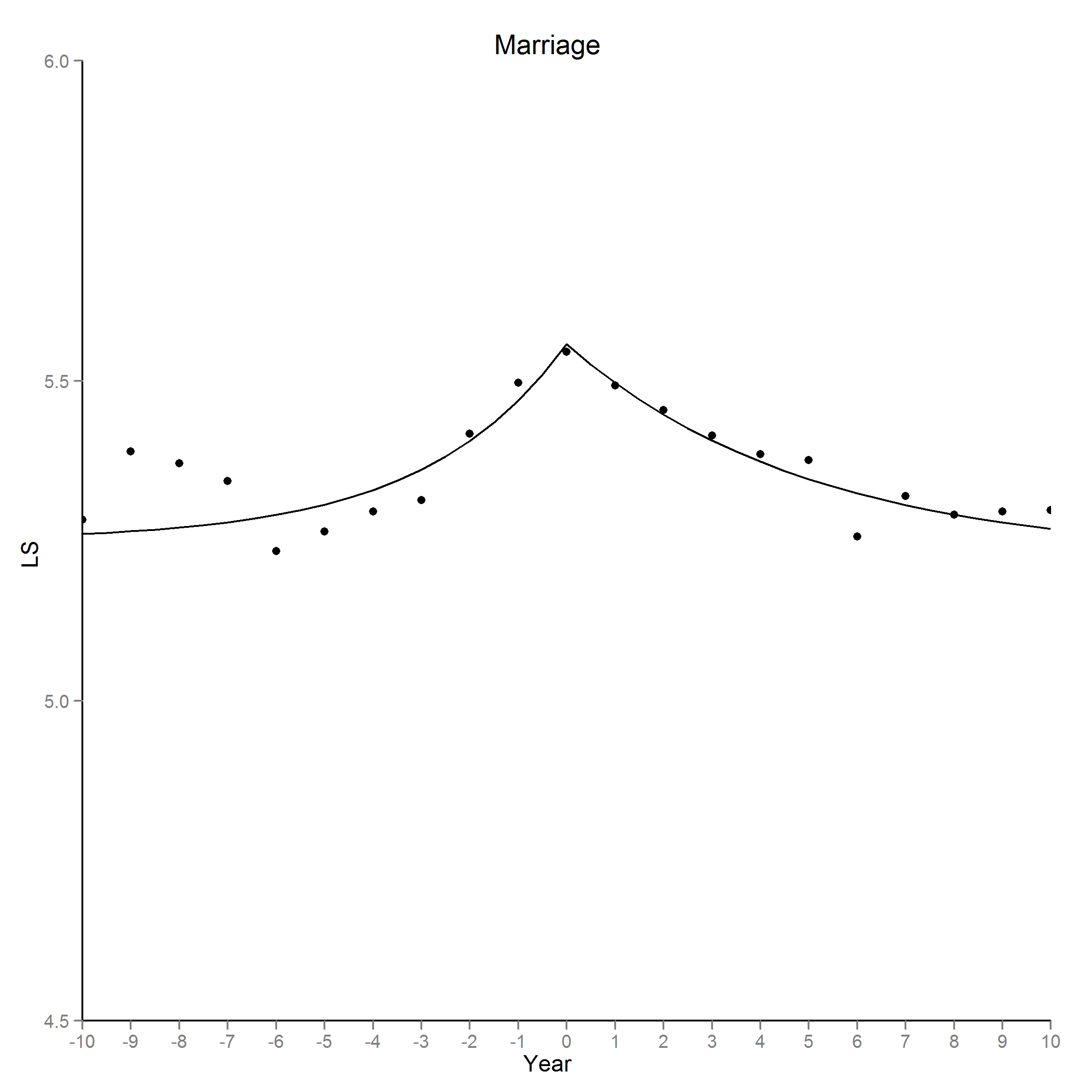 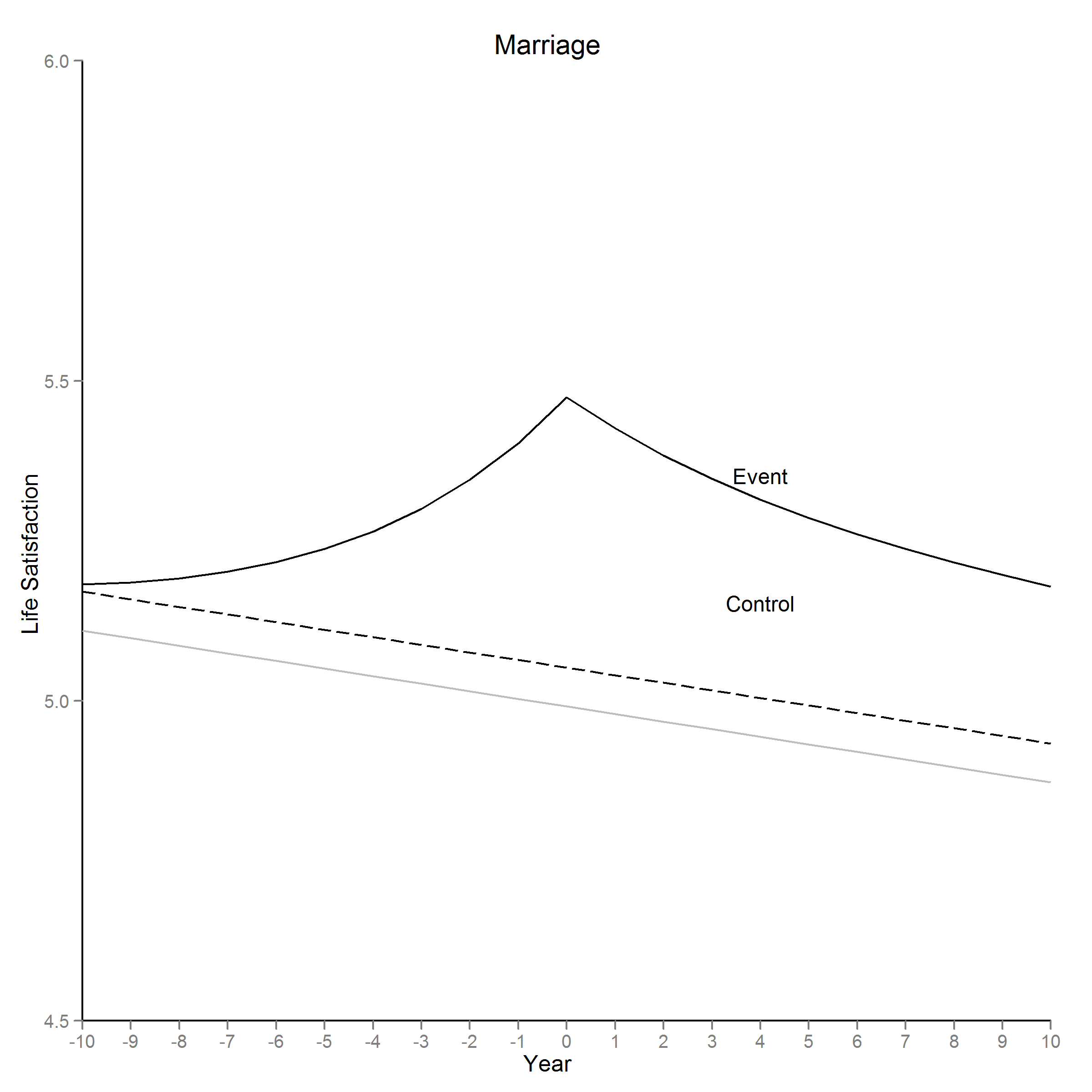 One major question that well-being researchers try to answer is whether major life events can have a permanent effect on subjective well-being. For years, psychologists assumed that the answer is "no" and that people inevitably adapt back to happines "set-points". In an early study, we found that soon after the event of marriage, people's levels of life satisfaction returned to the levels that they had been years before, a pattern that suggested complete adaptation. However, our early paper did not account for normative changes in life satisfaction that occur across the lifespan. In this follow-up paper, we use a different analytic technique to examine the extent to which people are happier than they would have been had they not married. Specifically, we compare life satisfaction trajectories for those who marry to a matched comparison group who never married. Our results suggest that even though people return to their original baseline levels, these levels are higher than they might have been had they not married. Click here for the paper, or request the paper here if you can't get access.